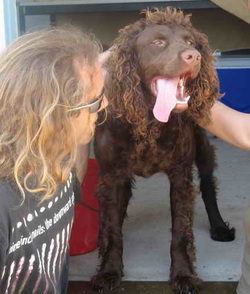 Ikey, the reason the Yahoo group started.One of the run ons from the 2006 litter.
After being flammed on a retriever board in July 2006 when I tried to help a poor breeder rehome excess puppies I saw red.It was suggested that our beloved Murray was a "designer dog" and why would people breed such monstrosities. Knowing a little of the  breed's history and having been involved with them since 1960 I started the Murray Group at Yahoo.

The Yahoo group is quieter now as social media has moved on but has valuable archives and databases. It can be found at http://pets.groups.yahoo.com/group/MRCCR/ 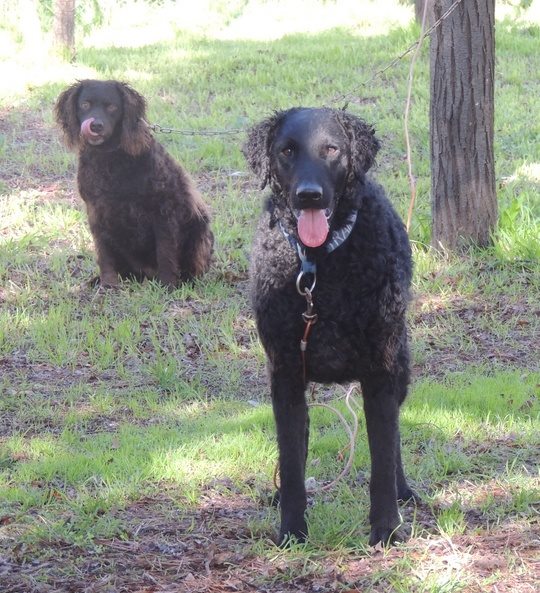 One for both owners and supporters " Murray River
Retriever" at

​
Wiki
Until Australia Day 2013 we did have a wiki page about the Murray Curly under Murray River Curly Coated Retriever however this was taken down by self proclaimed deletionists who claimed the Murray Curly was a non-notable derivant of the CCR. Despite revising the page and documenting and referencing they would not listen to reason. So since then there has been little information on the web. Apparently our Murray, the only Aussie developed retriever and a true icon  is just not important enough. I hope this website goes some way into addressing this void. It is a work in progress. I can provide references for most  written here and would appreciate  any information, references or historical pictures that readers , owners and supporters of our Murray Curly may have. We will get a page back on wiki! By my estimation with 25-30 litters born a year and an average of 8 pups a litter and lifespan of 12+ there would have to be 3,000
or more Murray River Retrievers  on the ground.